Models? On my modelling blog?

I finally have something to put up here! I have recently started up Modelsforthemasses.com, a prop modelling on-demand commission site dealy for source engine props. I was actually still coding the backend of the site when I got my first job request! Since then they have been coming through steadily, and I am on my way to being a self made freelance artist! That makes me so happy in warm fuzzy ways! Anyway, onto the pictures! 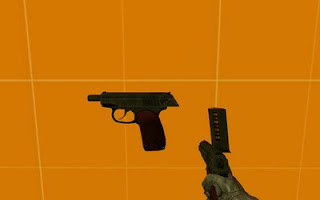 The first one is a Makarov pistol, a Russian weapon designed to propel balls of metal at high speeds with intent to harm, using a system of sliding metal parts and small amounts of pre-packaged explosives, all set off right in the palm of the wielders hand. It's an out there concept I know, probably won't catch on. Anyway I made it all from scratch and handpainted all the textures. It's the first ever weapon model I have made from start to finish, and I gotta say it was a bit of fun. As usual, loops and poles swung into action, even on this very inorganic model.

After the model was handed over to the dude, I needed to make some pictures to showcase it for the site so I quickly replaced the existing pistola in HL2 and recompiled. After some very quick adjustments and minimal changes, it used the existing pistol animations seamlessly, like it was made for it. Faaaaantastic. here's a picture of it reloading: 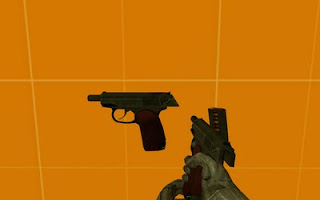 The next one was an SKS rifle, another russian weapon, but this time the dude had a highpoly model already made. After adjusting it to suit blender a bit I modelled the lowpoly out and baked the details on then textured it. Again, I compiled it just to showcase: 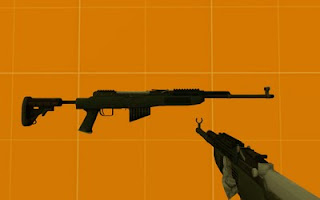 So, after making these and getting them to work in engine, I see now that I baked out way too many details. There are a lot of parts that I could have left on with no detriment to budget, since I could have deleted all the backfaces. You don't see the backfaces on viewmodels, but the engine renders them anyway, so you're better off baleting them. If I were to do it again I would leave a whole lot more poly details in since source is where normal maps go to die.

I have more requests coming in and I am currently working on one that I am excited to show here. Soon... very soon...