So I'm pretty proud of this 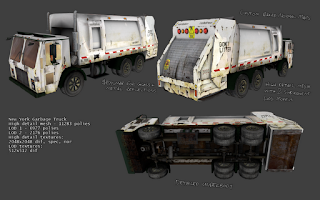 Another model made for ModelsfortheMasses. This one is supposed to be for a L4D map so it had to have a bit of detail in the underside and man was it a mission.

I started this one almost three months ago, and since starting it I have travelled to vanuatu, had christmas and new year, a few family crises and other model-halting experiences that made this one really drag on. All in all it's probably about 200 hours work. I like to take my time with the big detail models and I knew that this one would take a special amount of attention. Besides working on this though, I have been dabbling in UDK and trying to come up with a game I want to make. I really want to make a game.

The main thing I learned from this model is how to do sexy rust. Not particularly realistic rust, but it looks sexy at a glance, and that's the main thing. I think I might do a quick tutorial on it when I get some time to myself.

As much as I enjoy modelling and as proud as I am of this truck, man am I glad to see the back of it. It was one of those models that bore a searing hole in my skull when I was trying to sleep. It was a very big undertaking from the start and the only way I got through was by objectifying my approach and taking small bites at a time.

The highpoly took a long time to model. Using my approach to modelling, where I move a vert at a time and watch the loops form themselves, hard metal plates are a pain to make. Organic models are full of inherent detail but when you have a large metal plate and a little hole in the middle of it you have to make a whole lot of loops that mess up the shading on the rest of the surface. It was a challenge making the big blank spaces at the back of the truck container, and I got really impatient because I knew that the rest of the model was looming up ahead, so I made some bad decisions and took some big shorcuts. This resulted in me having to go back and remake the back end of the truck, a punishment for my own impatient self. Luckily the second time around I committed myself to the time it would take and got it done properly. 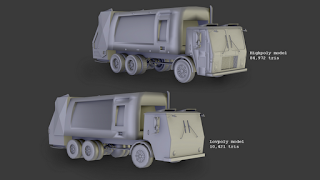 The texture was, as usual, the most time consuming part of the process, but with clever use of some overlays and masks I was able to pump in a lot of detail fairly early on. One thing I like about it is that the rust is all on layers that can be mutually exclusive. By disabling a layer in the .xcf file here and there you can take the truck from decrepit to used to brand new quite easily. I guess it would help for skins and such.

I really want to put this model behind me for now though so that's enough writing about it. I'm done. Yeyyy...