As we have already seen, DA is all about continual, flowing movement through the environment. We have managed to tailor the environment to uninterrupted slides and dives, but what about the greater picture? The very layout of a map should allow our action heroes to continually run, dive and slide without hitting a wall or a dead end and having to recalibrate their path. My favourite way of ensuring this is to plan our map in terms of:

When planning a map (which is something that needs to take place before starting) you should take into account the greater travel paths of our intrepid heroes. A simple way to think of this for now is three circles overlapping, like a ven diagram: 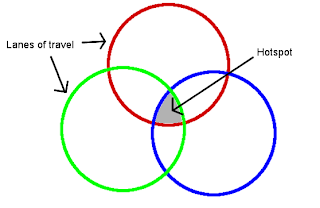 Our wide awake and alert tutorialees may have noticed I just snuck in the concept of 'hotspots' ever so sneakily. Oh what's that? It's a perfect segue to the next topic?

Hotspots are the core of a maps boogability. Hotspots are the points where all the players collide and duke it out in a grand battle royale. On rooftops it's that one spot at the top of the ramp, between the tall building and the other thing - you know the one I'm talking about, where everyone ends up sliding off the edge and superfalling to an epic death. On megachat it's near the spinny playground thingy and on streets it's the bit near the busted up truck all the way down the road to the construction site. These places are all hotspots created by overlapping paths.

In the past we have had maps that are designed around other concepts and they aren't particularly as fun. Cocaine used to be druglab and it had a lot of dead ends. As such it was a halting map that was only good after it got going. Doubletrouble had no circular paths but conformed to a more linear layout which ended up being too hectic or too boring unless it was in the 6 player sweet spot. Maps can have more than one hotspot, but for maximum boogaloo it is best to have one main hotspot with any others being incidental, or secondary hotspots.

So lets have a look at the plan for our tutorial map. I have designed this map in order to 100% conform to the guidelines I am writing about. Feel free to break the rules a bit in your own maps but you need to know the rules in order to know how to break them. 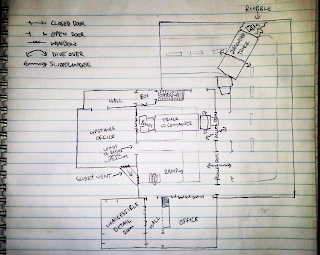 What's that? Pen and paper?

Pencil on paper is my second favourite way to plan maps. A whiteboard and a bunch of different coloured markers is the epitome of awesome when it comes to map design. As you can see here, after I am happy with the paper design, I do it all over in pen and rub out the messy pencil lines. Then I take a picture of it (or scan it if you can) and drop it into my editing program so I can use layers to describe the map better. 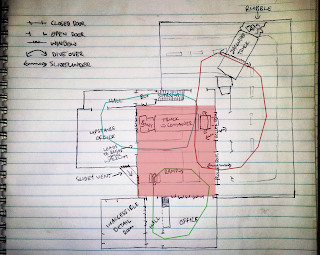 We live in a digital age

As you can see I have based the areas on three overlapping circles with the hotspot (in red) in the middle. Now, for a server with 16 people on it this map would be extremely tight, but up to five or six it would be just about right. This is why it is sometimes nice to have a secondary hotspot. If your first hotspot is a little tight for ten players then a secondary hotspot can add to the scalability of the map. When there are fewer players they can stick to the primary hotspot but with more they can spill over into the secondary as well. If I wanted to make this map more scalable (which I would if it were going to be played) I would add some paths to the outside area with the jacknifed truck and have that as my secondary. It's close enough to the action to catch the overflow of battle but it's de-centralized enough that if there were fewer players they could just use it as a path section.

With this approach to hotspot creation we inherently create a hotspot that has a lot of entry and exit points, which allows our players to 'switch lanes' and create more complex paths for themselves. To encourage this, it is nice to put in some extra accesses between paths, such as the 'slidey vent' that goes between the blue and green paths. This will be a vent the player can slide into and bust out into the hotspot to rain lead on an unsuspecting mook.

When a player spawns, it's likely he has just been taken out by an adversary in the hotspot. He wants to get back into the action and boogle the loo out of that chump. Player spawns should be placed along the paths, facing the next area access point. As such, I want to place my spawns thusly: 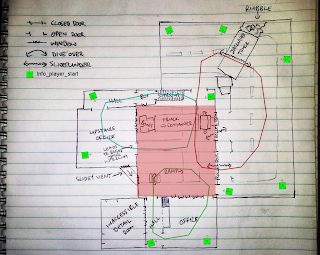 I'm almost out of gum

Now when a player spawns they can simply move forward and go bumbling towards the hotspot in a short amount of time. Note that there aren't any spawns inside the hotspot. A rule of thumb is that the hotspot is cool to enter at a dive, not to spawn into with a shotgun blast ready for your face. If you like ruling your thumbs, another one is to always have at least two primary entry points to every room. A water closet style dead end is something we want to absolutely avoid. There is no gameplay value in a dead end room. Also try to keep access points on different walls. When the player enters the room they need to be able to immediately see a way out in case it all goes pear shaped and they need to escape with the hair barely on their behinds.

This path concept is more of a guide than a rule, but most of our fun maps have somewhat conformed to this design. I appreciate having guidelines to inform my designs that are based on actual playtest data and this is the best I have come up with so far. Feel free to modify it in your maps but it is most important to have the player continually moving in any environment.